Earlier in the week we reported on cool new posters for everyone’s favourite merc with a mouth’s upcoming sequel, DEADPOOL 2. It now seems you can’t keep a good sword-wielding madman quiet when he has a movie to promote as thanks to Good Housekeeping we can have a glimpse at another piece of nifty artwork for the movie: 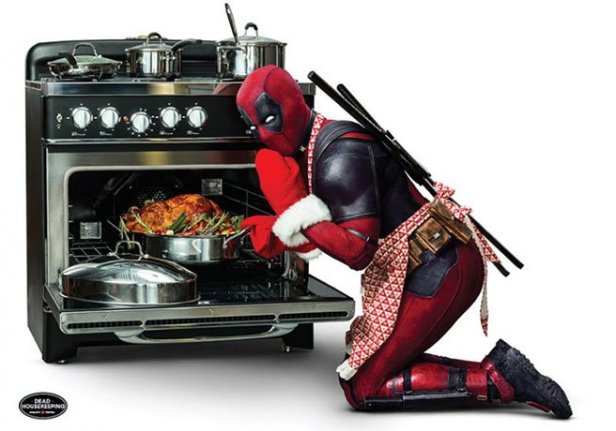 Pretty fun huh? Not only that but Good Housekeeping had the following to say about Deadpool acting as guest editor for their new edition that is released tomorrow. Editor in chief Jane Francisco said:

“Deadpool’s persistence to be in Good Housekeeping was impressive – initially we had no idea who he was, let alone that he was a fan of the magazine. But after repeated attempts to ignore his… passion… we came to a compromise. He could appear in one issue, if he promised to stop leaving care packages at our editors’ homes and agreed to maintain a 50-foot distance from the Good Housekeeping offices and our staff,”
Deadpool himself had the following to add:

“After years of weekly emails and countless carrier pigeons, Good Housekeeping finally returned my calls, and while it’s a dream come true, apparently we have vastly different opinions on the definition of a ‘holiday spread’…”
DEADPOOL 2 is due for release on 1st June 2018!