There’s a decent movie hidden somewhere in the quirky mess that is Matt Damon’s latest film. Unfortunately, like the main protagonists of the movie, it is hard to see where. The film starts off perfectly adequately with director Alexander Payne (Sideways) bringing an interesting premise to life with a good basic set-up; scientists find a way of shrinking people so that the human population’s levels of consumption and waste are reduced, the cost of living smaller and the planet can live longer. Hooray! So far so good, so far so very Payne-esque. 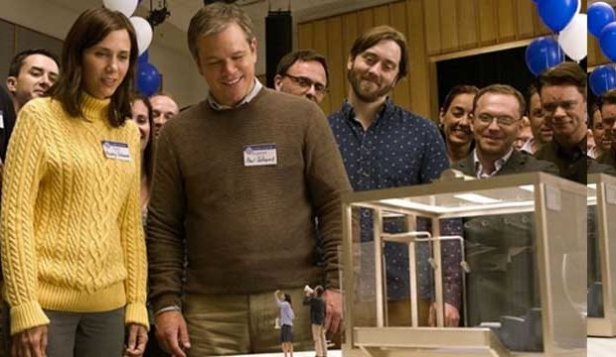 Unfortunately, as soon as the narrative kicks in properly and Damon’s lifeless and dreary Paul Safranek makes a life-changing decision, the film loses its satirical bite and becomes directionless. There is far more the movie could have said about the social and ethical issues with creating a separate world inhabited by shrunken humans but there is no conflict to spark it to life. Instead what we get are characters with questionable motives who are introduced to perhaps bring some humour to the proceedings but only manage to be offensive and badly written.

At the heart of the film, and the route of it’s problems, is Hong Chau’s Ngoc whose intentions and impact on the plot are admirable but her performance is odd to say the least. This leads to a romantic sub-plot that feels forced and unbelievable and only drags the movie along when it should be firing up to a rousing conclusion.

Unfortunately DOWNSIZING loses it’s way too quickly and not even a stellar cast that includes Christopher Waltz, Kristen Wiig and Laura Dern in a small cameo can save. Instead what we get is a film with a good premise but without a clue as to where to go with it. Disappointing.